You are here: Home / Adventure / Biking / How far would you go to make a difference in a stranger’s life?

How far would you go to make a difference in a stranger’s life?

How far would you go to make a difference in a stranger’s life?

I know exactly how far I will: three hundred miles that’s how far my team will pedal next November to raise $10,000 for a bunch of people we never met.

Even though we don’t know their names we know their mission. These students all work together to solve critical environmental and social issues in the Middle East. The Arava Institute Bike Ride is an international event that brings together Americans, Palestinians, Jordanians and Israelis to tackle the region’s environmental issues: water resources, air pollution and sustainability. In short, they are preparing the future Arab and Jewish leaders to work together.

On my last visit to the Arava Institute I met Suliman Hallasah, a Jordanian Arava Alumni that went on to co-create the Arava solar power Co. and is now the CEO of the Jordanian partner company. There was Ilana Meallem, Israeli, initiator of the Biogas and Women’s health project and now co-founder with 3 other alumni of the EcoME centre, a model for social and environmental sustainability across divides, located in the west bank next to Jericho. And Mousa Diabat, from Turan, a Palestinian village in Israel, now doing his PhD in water management in Oregon. The list goes on and on, but the theme is the same: nature knows no borders and neither should we.

The dollars we raise will go toward scholarships that will enable several new students to attend the Arava Institute and become the next generation of conservationists and peacemakers for the region. These students risk being ostracized by their families and friends for working with perceived adversaries. But they know that the only way forward is to find common ground. These graduates often return to their communities as stewards of change and recruit others. Each steward can impact hundreds.

The story gets deeper. My brother Eyal and I are both from Israel. Eyal is only 47, but already has had a heart attack and an early onset of Parkinson’s. So pedaling three hundred miles across Israel’s desert is one heck of a challenge, but he’s taken it on. We have decided to build a special bike to make this ride possible. Our recumbent tandem will allow 2 riders of different physical capabilities to ride together, each at his pace. Her name is Camello [Camel] and she will ferry us across the Negev Desert to Eilat, where we grew up. This marvelous machine is being built by Stephen Bilenky our gold sponsor!

We are asking you to support us by donating just $25. That’s it!

If enough friends step-up to make small donations, we can take this over the top together. If you are hesitating because $25 seems meaningless in the big picture, think again. Last year the Arava Ride raised $510,000 mostly from small donations. There is great power in numbers and the combined generosity of caring people. (Of course if you are in a position to donate more, that would be completely awesome.)

So please take a moment -right now- to check out this link and make a small online donation to support our big hairy challenge and a sustainable planet.

We can either sit on the sidelines, or sit in the saddle and ride for Peace and Sustainability. We choose to ride!

Share !
Previous: Father’s Day Cards
Next: 20 Days to Go… so Where’s the Adventure? 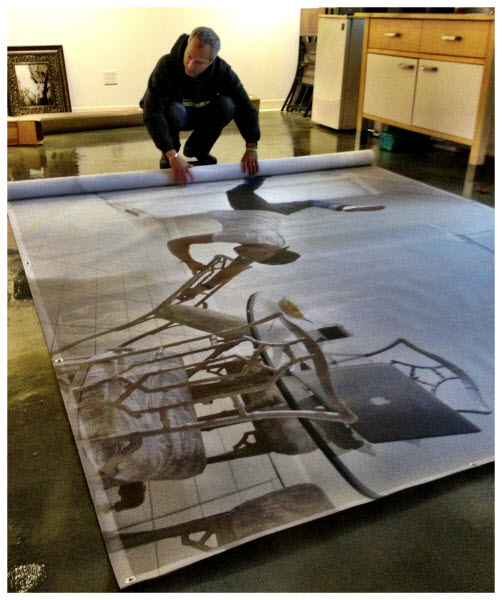