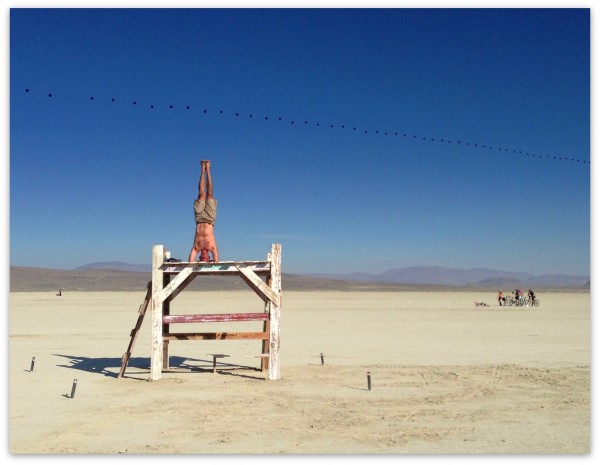 I’ve always been a burner and a desert man. I was raised by bonfires in the Israeli desert and today I burn a wood stove in my house, a fire-pit on my deck and a sandpit on the beach. Maybe that’s why I was drawn to the Burning Man festival in Nevada – the mecca for burners. This is where massive art structures are erected in the desert and then burned down. Sooner or later any self-respecting burner ends up there, and my time had come. But I was not prepared for the mind fuck I was about to enter. 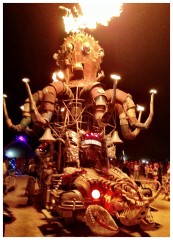 When I got there I heard the beat. The music was everywhere and the drone of the music never stopped. Seventy thousand burners camped out in tents and RVs, there to party hard, making sleep very optional. I found this out when a mechanical octopus the size of a house, spewing fire from each artifice, parked outside my tent and turned the night into daylight with each pyro burp.

Rise and shine burner man, it’s party time. As tempting as it was to leap from my tent and dance around this music-blasting-pyro-octopus with people in various states of nakedness and sobriety, I clung to my schedule. I had a 5 AM date with my bicycle and the deep playa — the outer reaches of Black Rock City. I was the self-appointed dawn patrol in search of my desert experience, the vastness, and the pre-dawn colors. 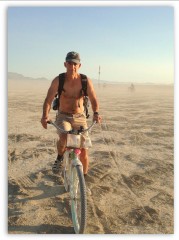 I lit up my bike and headed into the darkness. No hangover for me — every cell in my body ached to experience this thing called radical self-expression that was everywhere around me. I rode straight out in the flat desert chasing the sunrise parties in deep playa. On the way I met Ben towing a BBQ and making fried eggs on bagels for anyone still awake. There is no money exchanged on the playa just gifts. I took a bagel, made him a portrait with my iPhone and rode on. 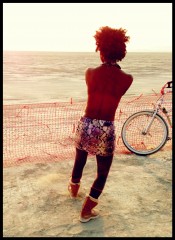 When I got to the edge of our temporary city, there was a double-decker art car cranking great music and a magnificent black woman dancing bare-chested to the rays of the emerging sun. She cut a silhouette so primal and inviting that I dropped my bike and started to dance with her. Her breasts were covered with dust and her smile was tantalizing. And for a minute I wanted to rip off my shirt and dance all out, but the light was perfect and the calling to make the photo won. This time around my way to participate in this community is to shoot and share, which I continued with a passion until I made nearly a hundred portraits and precious connections. I love the photo of the dancer, but that dance could have been epic…next time.

Aside from the deep playa, the other sanctuary I found was the Temple: A towering pyramid made of interlocking, finely-engineered planks that became an instant magnet for anyone wishing to meditate or remember a loved one. The Lego-like pieces provided a writing surface for people to inscribe messages to those they lost. You could spend days wandering around reading the memorials. Few leave with a dry eye. After a couple of days all of this is burned down in silence and only the memories of those who passed  away will endure. A stark reminder that all we have is the present. 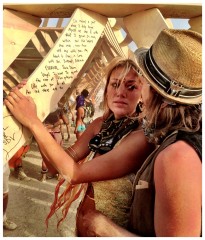 Tyler from our camp chose this spot to propose to Sara, and a few of us came early to record the event. He wrote the proposal on one of the planks and waited, armed with a ring and a cup of wine till she came around to read it and say yes. Many magical moments are born under this transient temple. I sat still, watched and waited for the next one.

I continued on before the playa turned into a dusty oven. The sights, sounds and people around me seemed invented, but the desert is very real. At any time a dust storm can kick up and create a whiteout. In my pack I always carried water, a pair of goggles and a dust mask. Here you have to learn radical self-reliance, but also be ready to give to a fellow burner in need; a good lesson to pack out with you to the default world. 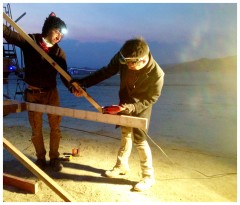 On the next dawn patrol I ran into Jeremy, trying to erect his art. Surrounded by helpers, tools and lighting, he was busy solving last-minute problems. What compels him to put his engineering job on hold, work for a year, raise money and volunteers to put up this art for a week? It’s not fame or money; it’s just the drive to express himself. He reminds me of the early days of the Web. The Web is the global platform for expression producing more content in a few years than during the entire history of mankind. Both online and playa worlds are driven by a need to express. I can’t help but pick up a hammer and join Greg with his project. Pitching in is contagious on the playa; a feeling that you hope to bring back home somehow. 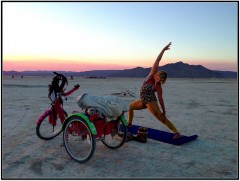 Thinking that I would be practicing yoga every chance I could, I brought my mat. But as it turned out, I never found a space to unroll it. The yoga classes I found were held in hot tents that never seemed inviting. Instead, I envisioned a wooden platform in the deep playa equipped with permanent mats and surrounded by silk prayer flags. I never found my sun-salutation-station, but next time you’ll find me there at sunrise practicing Surya Namaskar with others who want to be one with the dust. Bring a mask just in case. Who wants to help me build it?

Can you imagine being a burner?   Discuss below >>

Share !
Previous: Listen To The Beat
Next: Doing the right thing will do 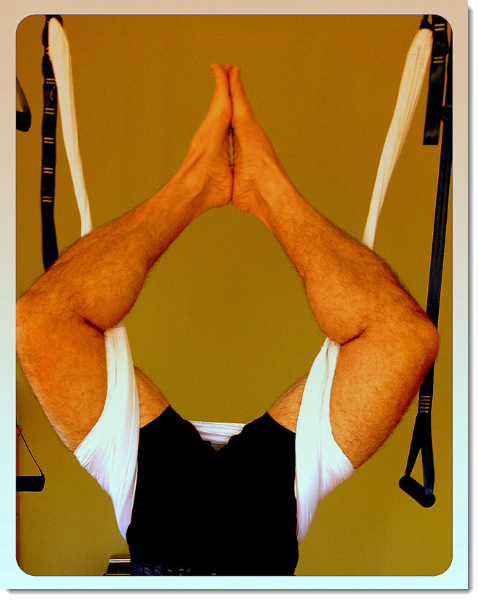