You are here: Home / Latest Safaris / Where Prana meets Mana…

Before I stepped through the door, I knew there was something special about Pineapple Yoga, in Kilauea, Kauai, and its teacher named Eagle. A simple sign in front of a community hall announced the space was open for practice. No props, no boutique or bookstore, just a picture of Guruji (Patthabi Jois) overlooking a large wooden floor. I laid down my mat and started to practice. 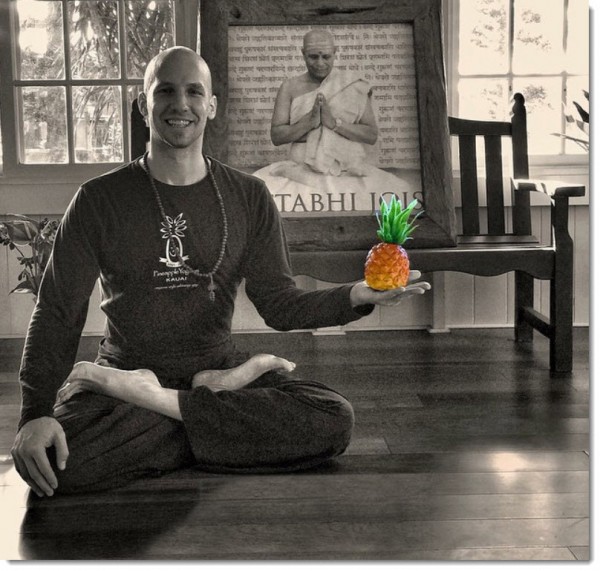 Over the past couple of years I’ve been searching for a way to heal my back injury. I’ve come a long way with my yoga practice, but my back is still not as flexible nor as powerful as it once was. Like Eagle, after injuring my back I had to face a new set of limitations, which I’m not yet ready to accept. But I’m getting ahead of myself.

Twenty years ago, Eagle, the youngest world champion in racquetball, was in a car accident. A year later, he was still not able to walk without searing pain. He opted to undergo a 360-degree laminectomy, a procedure to stabilize the spine using shaved portions of his hipbones, as well as bone fragments from a cadaver, to pack the area between his tail bone and lowest vertebrae. Though my injury was much less dramatic and did not warrant surgery, I immediately related to his story especially once I learned that he made an epic comeback to be one of the best players in the world. And he healed himself practicing Ashtanga yoga. Watching Eagle move between his students infused me with hope.

Eagle grew up around his father’s athletic club enabling him to absorb some yoga basics throughout his racquetball career. While his peers were just hanging out between matches, he found ways to prepare for his games using Eastern philosophy and taking asana. The concepts of discipline and practice were partly taken from the likes of childhood heroes like Bruce Lee and Chuck Norris who influenced the way he trained. Eagle had no idea that one day he would need to draw on his early experiences to heal his way out of a life-altering challenge.

I too had to learn acceptance, observance, and self-healing. One thing we both understood quickly is that the healing would come from the inside not from a doctor’s prescription. In our own way we each took on the responsibility to care for ourselves. That was the key.

Eagle had a plan. He gradually rebuilt himself by integrating yoga, energy locks (bandhas), and a vegan lifestyle into his racquetball dance. He told me, “I essentially reconstructed the way I prepared myself for movement, how I got my body warm, how I cooled my body off. I created a whole new pattern of rituals.” He knew he was on the right track when he stepped back onto a racquetball court and was no longer just shadow swinging but whacking at a real ball. It worked. As the pain diminished, he grew stronger and so did the dream of a comeback.

His return was about being mentally and physically ready to compete on the International Racquetball Tour with a group of trained assassins. “I mean, these guys were incredibly quick. When you start playing pros for money, another level of effort is required.” As a result Eagle ranked number two in the nation and 10th in the world on the pro tour, post-spinal surgery.

I, too, spent over two years healing my back using Ashtanga and mindfulness. Although I didn’t have to compete on pro tours to test my mettle I did eventually reach a physical and spiritual plane not previously accessible. All without injections, surgery or any drugs. Both of us had an experience that left us hungry for a deeper understanding of what the body and soul were capable.

Eagle found his answers in India. He retired and sold his possessions to study with Patthabi Jois, (Ashtanga guru) for 10 years. I, on the other hand, committed to a 6-day practice regime, set up a home studio, and traveled to study with the top teachers in the country. Eagle came to Hawaii in 2001 and founded Pineapple Yoga in the meeting hall of a local church, but that was just the start. In 2008 he was given full sized plans to build a Pineapple Yoga Temple by an architect friend, Michael Patton. The Temple structure is based on the Flower of Life, a sacred geometry pattern designed to support the practitioner and his intention to the fullest extent.

floor plan based on sacred geometry

Eagle took the plans to India to share with his teacher, Patthabi Jois and his immediate family. “I unraveled the plans and hooked the rolling paper over Jois’ right thigh and my left thigh. I explained to the family what Sacred Geometry is and how it’s similar to the Indian system of Vastu shastra. There wasn’t a photograph. There wasn’t a video. It was just this private moment that I had with the Jois Family. They gave me their blessing to create the Temple to celebrate and share the lifestyle that I discovered since my accident. From that moment I practice and teach each day knowing that sooner or later all will be coming.” 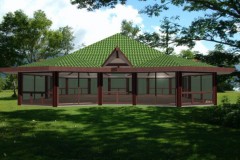 For me it’s also been a long journey, but here I am on Kauai — The Garden Island — rediscovering what it’s like being outside more than inside. Letting my body rediscover balance, hopping between boulders on muddy trails, filling my lungs with warm rich jungle air and letting it all out in the surf. Yoga alone is no longer enough for me, it’s a preparation to live an organic lifestyle.

I think the Pineapple Yoga Temple will become a place for both the local and global community to show up, to practice and to build a foundation for a natural lifestyle. Something tells me that the magical setting, the sacred geometry, the practice and the teacher will combine to make this worthy of an annual pilgrimage. Pineapple Yoga I will be back. 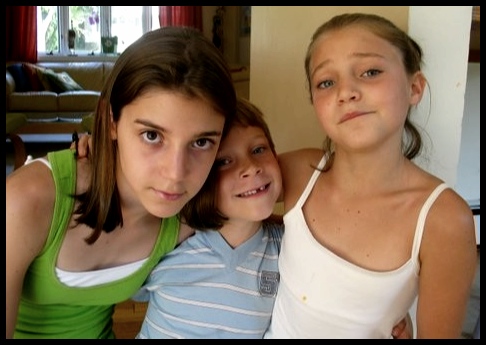