You are here: Home / Latest Safaris / The Body & Soul of Jeff Logan

The Body & Soul of Jeff Logan

It’s 4:15 AM and there is no need for an alarm clock. Jeff Logan is already awake and about to take his daily yoga practice. He has been practicing for 32 years, 6 days a week and aside from Sundays, Jeff never takes a break. For Jeff, yoga is not optional; it’s his lifeline to sanity. It’s an obsession. Jeff is not seeking enlightenment through his yoga, he first started practicing to drown the guilt and fear from a divorce and today to shake off the overall anxieties that come from being alive. But mostly in those 75 minutes of practice he’s getting over himself so he can serve others. Jeff at 68 had taught over 10,000 classes and is the closest thing to a yogi that I ever met.

Talking to Jeff at a local bakery reminded me that yoga is really a hard earned tool. Often there is no glory just hard work. It’s the time to spend meditating and re-arranging body limbs, for self-care, for centering and grounding so that there is space to serve others. It’s something that you do each day as part of life and doing it for over 30 years is no different than brushing your teeth for that long. You just do it.

As far as the effects of aging, Jeff contends that now it takes him longer to warm-up. For example, he can no longer just slide into a Mayurasana demo (peacock pose), he has to be warmed up. Just to give you a perspective, if you did a search in your local area code there are probably 5 people who can do Mayurasana, no matter what age or state of readiness. Jeff has discovered that aging has some benefits. He’s found a quite strength and a deep grace on and off the mat. He contends that the poses he takes are now more integrated; with both body and mind drawing on muscle memory from thousands of hours of practice. And although his tendons are drying out, his muscles are still responding to the stretching and his hamstrings are still open for business.

I was curious how Jeff dealt with the inevitable injuries that crop up as part of a dedicated and long-term practice. Jeff religiously follows more than 30 specific Iyengar sequences that are prescribed in back of “Light on Yoga.” Once he picks a sequence, he follows it as to the tee. If a body part is not with the program on a given day, he will negotiate with it and come up with a modification. But he will never skip it entirely.

But let’s go back to the underlying obsession. Jeff insists that the most dedicated yogis he knows come to the mat from a place of deficiency. That was a bombshell, but it holds true for the yogis I know as well. It took some time for his truth to sink in and then I started to look at myself. What deficiency was I trying to fill by having an increasingly dedicated and regimented practice?

I’ve always had a passion for adventures even if they took thousands for miles of self-propelled dedication and now I simply transferred that dedication to the mat. It’s a daily reminder that I can still do what I set out to do, but now to the confines of a 7 foot space. Here, if an aging body part doesn’t cooperate, then l can negotiate with it; I’m not stuck with a 50 pound backpack in the middle of Bhutan. Sounds safe doesn’t it?

Holy cannoli, maybe Jeff is right. I’ve been coming to the mat out of fear, a fear of adventure and the unknown, the very thing I was born to do. I have taken refuge from chaos and the mounting evidence of aging on my mat. It has played beautifully for my need for control and predictability and it cut me off from the heart of the matter, the adventure itself. But maybe like Jeff, after my morning ritual, I will eventually be prepared to let go of my mat and embrace the world without a plan. This guy can still teach me a thing or two.

Sitting across from Jeff watching him scarf down another cannoli reminds me that he was my first yoga teacher. He’s a guru full of wonderful contradictions, the only guy I know that consistently gets speeding tickets while rushing to a meditation class, which never starts anyway until a devotee brings him a cup of Duncan coffee.

No straight lines with Jeff except for the matters of the Soul. And there is and always will be a straight path from his heart to his students. I have been lucky to be one.

Share !
Previous: Giving Silence…
Next: Who Wants to Bike to Gaza City? 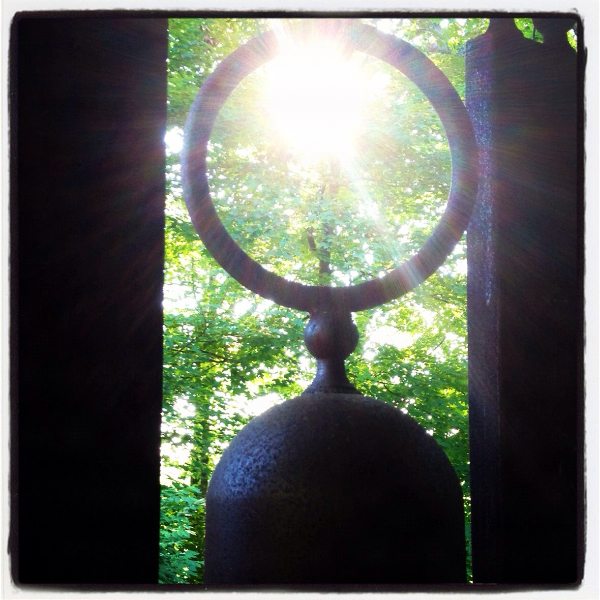